Playing Major Chords on Guitar is one of the very first things you should learn how to do on your journey towards becoming a great guitarist. Major chords are known for their bright and ‘happy’ disposition, unlike Minor chords which are known for their dark and ‘sad’ character. Major chords are found in absolutely every song and often to set the mood of the song, or even resolve a song at it’s climax in a pleasant way.

There are a number of different positions and ways to play major chords on guitar, but for this tutorial we’re going to focus on the first position at the very base of the guitar neck where the guitar tuning knobs sit. Aside from B and F, these chords are sometimes referred to as ‘open’ chords, or open string chords – not to be confused with open tuning. Before we get started, it’s important that you memorise the names of each of the strings on your guitar. The thickest string on the guitar, the one at the top when you sit down with your guitar is the E string, or ‘Low’ E string. Going down towards the second thickest string on the guitar we have the A string, followed by the D, G, B and finally the ‘High’ E string being the thinnest string on your guitar.

Are you ready to learn some major chords?

How to play the C Major chord on guitar

C Major is a very common chord that features in many popular and hit songs and is one of the easiest chords to play as a beginner. Starting with the right finger on your left hand on the 3rd fret of the A string (this is the second thickest string on your guitar), you simply then place your middle finger on the 2nd fret of the D string (third thickest) and finally your index finger on the first fret of the B string (the second thinnest string). One of the key factors in playing a C chord is that you actually start strumming from the A string instead of the E string (the thickest string on your guitar). It looks like this: 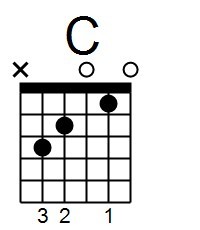 How  to play the D Major chord on guitar 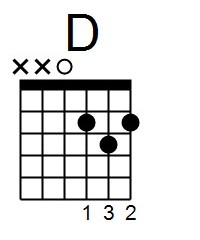 How To Play the E Major Chord on Guitar

The E Major chord is the easiest chord Major Chord you’ll ever learn to play and involves strumming every string on the guitar from low E to high E together. The E Major chord starts with your 2nd and 3rd fingers on the 2nd frets of the A and D string respectively, followed by your index finger on the 1st fret of the G string, like so: 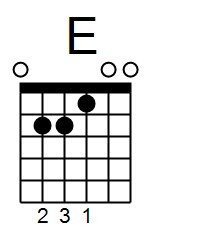 How to Play The F Major Chord

The F Major can be particularly tricky, but is a great chord that will introduce you to the concept of barre chords and using your index finger as a ‘bar’ across every string of the guitar. Starting with a flat bar made by the side of your index finger across every string of the guitar, you then simply use your remaining fingers to fret the chord in a similar fashion to the E Major chord we just discovered above, like so: 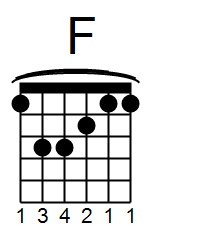 Mastering the F chord is the best introduction to barre chords and will be a huge help when delve into barring each of your chords so you can play them in various position and gain easy access to absolutely every chord on the guitar in any possible position. For now, just treat it like one of your other open chords and don’t “fret” too much about perfecting the bar shape, that’s a lesson for another day.

How To Play The G Major Chord

The G Major Chord can be tricky at first, but is a very rewarding and pleasant sounding chord when you master it’s quirks. Another chord that features every string on the guitar, the G Major Chord also uses every finger on your left hand, starting with your index finger on the 3rd fret of the low E string, your middle finger on the 2nd fret of the A string and then your ring finger and pinky on the 3rd fret of the B and high E string respectively. The key to playing an effective G Major chord is to keep your left hand relaxed and not to push hard with your thumb – over time you will be able to fret your fingers much more efficiently without trying to ‘clamp’ them down on the guitar neck, but for now, just take it easy and try to relaxed your fingers and wrist as much as possible. 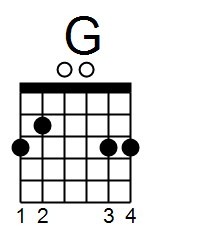 How To Play The A Major Chord

The A Major Chord is another easy one for you to master with a little practice. Again, starting from your A string, you simply fret the 2nd fret on the D, G and B strings using your index, middle and ring finger for this pretty sounding and simple chord, like so: 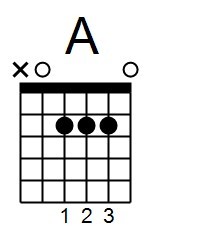 Remember, don’t hit that low E string when you strum the A Major chord or you will sound out of tune and dissonant!

How to play the B Major Chord on Guitar

B Major is another tricky chord like F Major in that it involves a Barre shape and again avoids strumming of the low E string, when you play it, but this time around, there are two different ways to implement a bar. You can either bar your index finger from the second fret on the A string right through to the high E string and fret the remaining notes on the 4th fret of the D, G and B strings with your middle, ring and pinky finger – or, you can simplify the chord by doing a bar with the your ring finger on the 4th fret from the D string, like so: 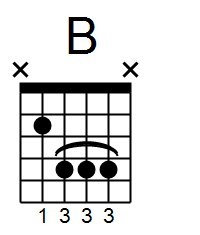 These basic chord shapes are the absolute best way to learn how to play Major chords on guitar, as they not only show you the base shapes for each of the main major chords, not including sharps and flats (we’ll get to that soon!) of course, but they also show you the two main barre shapes starting on the E string (F Major) and the A string (B Major).

With these basic shapes, you can start stretching your fingers and developing coordination between your hands by changing between each chord on this list while practising various strumming patterns to loosen up your hands and free your mind. We’ll look at taking these bar chords elsewhere on the fretboard soon, but for now, check out this guide on how to play Minor Chords on the Guitar so that you can start playing actual songs!

If you have any questions about playing Major Chords on the guitar, feel free to leave any feedback or questions below!