Learning the basic guitar chords like C, D and Em is pretty easy, right? But what about more challenging chords like a Bminor or the weirder ones like 7th chords, Diminished and add9 chords? These advanced level guitar chords used to make my head spin until I learned this simply trick for deciphering guitar chord charts and the incredible pattern that will allow you to play ANY chord ever created. This really worked for me, and it’s going to open up your guitar playing like never before – let me share with you the secret to playing guitar chords like a pro.

You’ve probably looked up guitar tabs for your favourite songs before – and find chord based songs pretty easy when they’re the common straightforward open chords like C major and E minor, but half way through the song the band throws in a totally weird chord that you’ve never heard of before, and one that you’re really struggling to remember from the overwhelming chaos that guitar tabs sometimes can seem like. How can you learn guitar chords quickly and easily, and is there a better way to play tricky chords that doesn’t require you to remember a million different chord structures and positions? Of course there is – so let’s get down to business.

How To Read Guitar Chord Charts

I remember having a guitar chord chart poster on my wall as a kid, and honestly, I never used the damn thing because it was just too damn hard to read. For starters, the guitar neck seems to be vertical on these diagrams, and I sure as hell wasn’t playing with my guitar pointing towards the sky, and secondly, there was no key for what all the markings, dots and numbers really meant on these charts – so beyond the very basic chords along the first few lines, things just became to complicated to follow towards the trickier chords at the bottom of the chart.

The secret to reading guitar chord charts with ease is this simple key that I’ve put together; 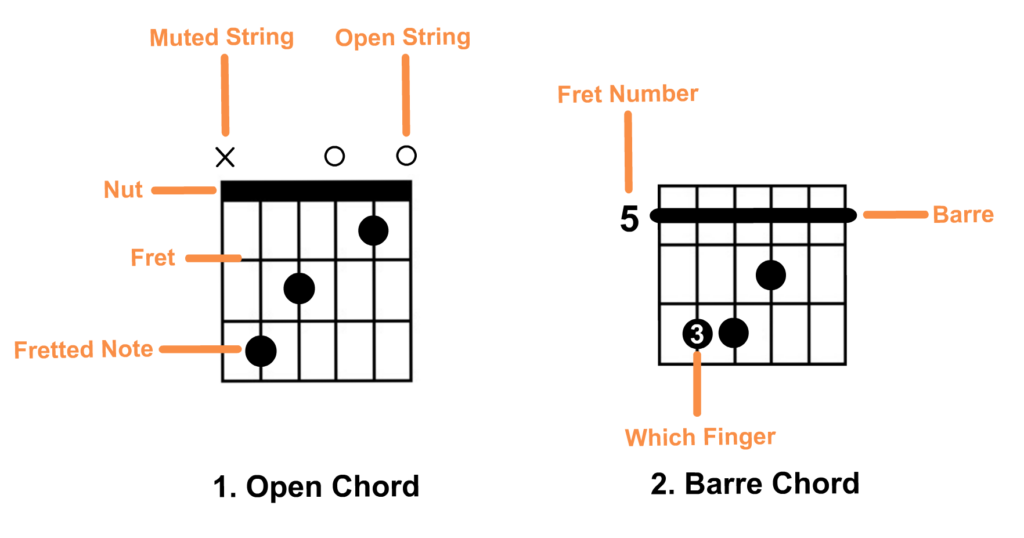 Now, you advanced guys that have been playing for 10, 20 or even 30 years like me might find this key a little old-hat, but I would have killed for this simple key to reading guitar chord charts in my early days, and I really wonder now why it wasn’t included on that guitar chart poster that seemed to taunt me as a kid. The reason I’m sharing this simple trick with you, is the fact that I wasn’t a “naturally gifted” guitarist, I’ve worked hard for the progress and success that I’ve enjoyed over the past three decades of studying the guitar – and I want to share with you just how simple it can be to improve your guitar playing. The ability to read guitar chord charts, along with basics like holding your pick correctly, a healthy posture, correct picking and fretting technique and other fundamental techniques like hammer-ons, slides, pull-offs and barre chords really do make up the “foundation” of your guitar playing ability. If your foundation sucks, then you’re really going to struggle when it comes to more advanced level songs that require you to build upon these foundations. In the same way that foundation is key to a great singing voice, a rock solid foundation really is key to becoming a better guitar player too – don’t shrug off the basics, they’re the mortar and glue that holds together an advanced guitarists’ technique.

Now, open chords follow their own rules and patterns, so it’s worthwhile using this key the learn the bulk of your open-position chords that involve open strings that aren’t fretted, because some of these chord patterns are really unique to the open position when you play – but as you ascend up the neck and learn about inversions and different positions along the neck, there is a set of specific patterns that actually repeat for EVERY single chord. A great example of this is a Bminor chord that is barred from the second fret on the A string (fifth string) of your guitar – this position can actually moved along to ANY fret on your guitar to change the key of this chord using exactly the same pattern – pretty cool, right? Well, the same goes for almost every other chord type, right through to advanced chord variations. All you need to do to play ANY chord, no matter the key, is memorise this one simple pattern just like the B minor barre chord to absolutely unlock your fretboard and release you from the ‘beginner’ sound that open chords often trap you in. Let me share with you this simple trick for learning any chord;

These simple patterns can be played at any position along the fretboard and your chord library will immediately grow ten fold!

Learning how to play barre chords in this manner really opened up my own ability to play my own favourite songs by my guitar heroes like Metallica, Led Zeppelin, Soundgarden and Nirvana – and also allowed me to start writing my own songs and start structuring my own progressions while understanding what made a great song ‘great’ in the first place. This also set the stage for incredible lead guitar technique too, and made the process of structuring solos over complicated progressions much easier as I started to notice these patterns all throughout my favourite songs, and also songs I have written myself.

Barre Chords really are the key to fluid movement around the fretboard as a rhythm guitarist!

If you have any questions about barre chords or these simple but effective chord patterns, feel free to leave any feedback or questions below!